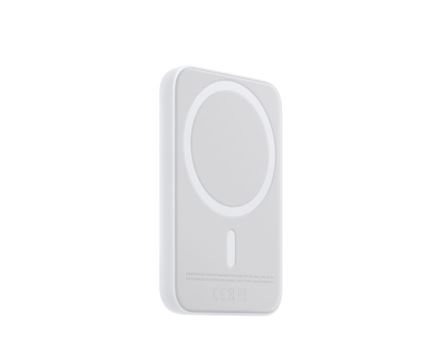 The latest addition to the company’s MagSafe accessory family is made primarily for the iPhone 12 lineup, from the Mini to the Pro Max. Like the other accessories, it snaps onto the back of the phone and begins charging at 5W automatically, no power button necessary.

5W jumps to15W wireless charging when the battery pack is connected to a 20W or higher power source with a lightening to usb-c cable. That’s just as fast as the original MagSafe charger launched with the iPhone 12 lineup. This will charge both your iPhone and battery pack simultaneously.

Apple also says that you can charge the battery pack through the iPhone. While snapped on, you can plug in a power source to the iPhone, and the battery pack will begin charging once the iPhone’s battery is 80% or higher. Technically, this is our first look at apple implementing “Reverse Wireless Charging” technology

New animations for the device comes with iOS 14.7 update that went live today, just in time for battery packs to hit the shelves. When connected, you’ll see a charging status on the lock screen and in the battery widget on the home screen, where the charge level of the pack will be displayed as well.

While apple doesn’t share the capacity of the battery pack, it’s estimated to be able to charge the phones sufficiently, though this is just speculation. A recent article by AppleInsider explains just how the rumoured 1,460mAh device might be able to fully charge the smaller iPhone 12 mini, 12 and 12 pro models.

The $99 price tag is very Apple-esque, but if ends up being as convenient as previous MagSafe accessories, it’ll be another hit from the Silicon Valley giants.

Online order deliveries are expected to begin on July 22nd.

Will you be grabbing one for yourself? Let us know down below.

Reasons why you should invest in Bitcoin