iOS 15 Beta Is Here! Our Top 5 Features
The public beta version of Apple’s next iPhone software update, iOS 15, is now available for their Beta Software Program members. Apple announced the iOS 15 update during WWDC back in June, along with upgrades to iPadOS 15 and MacOS 12 Monterey, their iPad and Mac softwares respectively. iOS 15 brings a slew of new features and changes to the iPhone and we’ve picked out our top five new features to look out for! 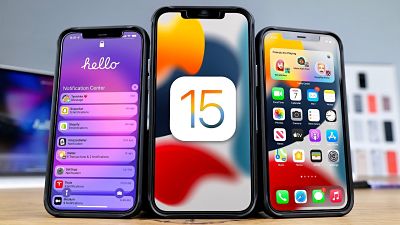 SharePlay allows users to watch movies and TV shows together from Apple TV+ listen to songs from Apple Music and share their screens during a FaceTime call with synced playback and controls. Every member of the call will see and hear everything at the same time, including when anyone hits pause, play or jumps ahead. You can extend SharePlay to your Apple TV to view shows on a big screen. SharePlay works across iPhone, iPad and Mac. Other streaming services like Disney+, ESPN plus, HBO Max, Hulu, Masterclass, Paramount plus, Pluto TV, Tik-Tok, Twitch and others will be integrating SHarePlay into their apps.

Spatial audio makes the voices on the call sound like they’re coming from where the person is on the screen. New microphone modes can isolate voices from background noise or be set to a wide spectrum mode to capture more ambient sounds.

There’s a new grid view that places everyone in a grid format so they can all be on the screen simultaneously and a portrait mode that blurs the background for a cleaner, more professional look.

Lastly, FaceTime can now be scheduled as an event by creating a shareable link (*cough* Zoom *cough*) that can be sent via Messages, Calendar, Mail, or third-party apps, so anyone can join a FaceTime call, even Android and Windows users through their web browser. Calls are still end-to-end encrypted on the web, so privacy is not lowered at all.

Redesigned apps
Some stock iOS apps have gotten a facelift, with new designs and a couple new features.

Some android users won’t have fond memories of Apple’s purchase of Darksky, the popular paid weather app, in April 2020, before making it exclusive to Apple device users only a few months later on July 1st.

Apple has now integrated some of Darksky’s looks and features into their stock weather app including new fullscreen animations of the current weather status like sun, rain, clouds, snow et cetera.

Safari has a redesigned look with the address bar now at the bottom of the screen. You can swipe across it to switch between open tabs and its bottom of the screen placement gives a full screen look to the browser’s interface, although it might take some time getting used to.

Maps is now more detailed with 3-D models of buildings and landmarks. Large, major cities will get 3-D models first  while small towns will likely never seen these changes.

The clock app now lets you type the time into your alarms instead of using the slider.(Finally!)

Likely Apple’s answer to Google Lens, Live text uses on-device intelligence to recognise text in a photo and allows users to take action. For example, text can be copied directly from a photo and pasted in messages or notes, phone numbers can be extracted with the option to make a call and the camera app can be used to copy text in the moment like the Wi-Fi password under your friends modem using Apple’s neural engine.

Visual Look Up recognises objects, places, animals and plants and allows users to get more information about them from the web. These features are available for Apple devices with A12 bionic chips and later and do not work on videos.

iOS notifications have a new design with bigger icons and contact photos for people on lock screen. A new feature called notification summary rounds up notifications and sorts them by priority based on a user’s interaction with apps, with the most important ones moved to the top. Urgent messages will not be delivered immediately and will not end up in the summary. You can also meet any up or messaging thread manually for the next hour or for the day.

Our last top 5 feature is Focus modes. This filters notifications and accessible apps based on what the user wants to focus on. You can use Apple’s suggested focus modes like Work, Home, Personal and Sleep or create custom modes for your unique scenarios.

When a mode is selected, only notifications from your chosen apps can be received and your focus mode status is automatically displayed to others in messages, letting them know that you are not available.

Each mode can be set up to automatically turn on or off depending on location or time of day and you can create home screen pages with apps and widgets that only apply to the current mode. Once a focus mode is set on one Apple device it automatically applies to all your other Apple devices.

You can read the entire press release from Apple, showing everything new with iOS 15 here.

Comment below and tell us what iOS 15 features you’re excited about!

Reasons why you should invest in Bitcoin